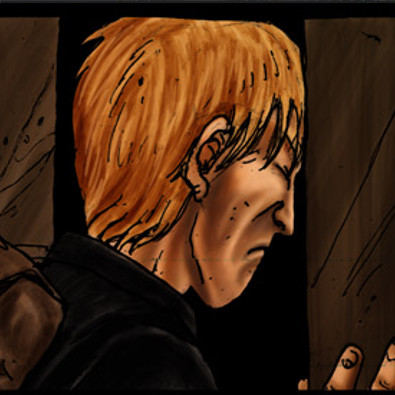 Art by Pit-Face and Tantz Aerine

Expressions are key when drawing characters in webcomics- it’s understandably the acting portion of the creative work, and it has to be done well to engage the reader.

In my opinion there are no easy or difficult expressions- only expressions you as a creator feel you are more or less familiar with displaying on your character’s face.

Still, one could argue that extreme emotions could be easier to depict through extreme contortions of the face.

What of the subtler ones then?

Emotions that are low key in their manifestations, for whatever reason (be it that the character is low key, or reserved, or numb, or reluctant to display emotions at all), might put an extra difficulty to get them depicted on the face and/or the body. I have found that the bigger (i.e. the more intense) the emotion that is being muted or under-emoted, the more difficult it is to visually display that intensity (though not necessarily what the emotion is).

The way I approach this issue is to employ the entire body language (shaking hands, balled fists, curved shoulders, positioning of the feet, etc) to complement the expression of the face by having those be more dramatic than what the facial features are forming, maybe over a couple of panels as the wave of intensity comes over and through the character’s heart and mind.

Finally, I also use ‘unusual’ expression creases on the face, that wouldn’t normally exist in the expression was as ‘lax’ as it seems.

What about you? How do you approach this?

I tend to work on faces a lot when I'm practicing, but when it comes down to final pencils for a panel i usually take another sheet of scratch paper and draw the angle i want on the characters face or body again and again with subtle differences. After I get a few I kinda like I rip parts of different pictures (eyes from this one, hands from that one) and plop them all into one big Frankenstein monster of complete image :) its a little time consuming but I enjoy the process and its a great way to loosen up your hand for a final drawing.

I make faces when drawing emotions like i think ill do better by making a face when i am drawing a angry face! Also i add some angry music in for more angryness! Body language is spot on and eyebrows/eyes....

For lots of emotions, I keep a mirror nearby, put on my best acting face, and draw in overly-dramatic style what I see!! :D

Body language and eyes. Eyebrows move and the shape of the eyes subtly change and a slight hand gesture or movement of the shoulders. Maybe I'm too subtle but it is always there as I create my scenes.

I tend to draw a partially manga-inspired style, so for lighter-hearted scenes, I opt for a sweatdrop or "vein" at times. Due to the simple art style I stumble around with, all notes of serious emotion are subtle (and I always worry they don't show at all). It also depends on the character. A couple emote with their entire bodies all the time, blush easily, weep openly, etc. Others are stoic, even to a point of hiding expressions with sunglasses and/or leaving the room. Mostly due to my own artistic shortcomings, I find ways around attempting to draw facial expressions. :P Easier with a stoic character -- I have those closest to him/her comment on a behavioral change or ask if they are okay. Inner monologue is a good cop-out too. Camera angles to avoid the faces all-together like a distant birds-eye shot or a close-up of a clenched fist. If they have a pet, the emotion can be projected into the pet's behavior. I'm getting good at not drawing stuff.

Expressions really bring a character's face to life and body language even more so! I like to over exaggerate some times, I like the way that looks- when you go from realistic to almost cartoony.

I don't know if low-key expressions are any harder than others, because even the goofiest cartoon expression are a meticulous precision job when you think about them. I found the best way is not to. With me they either work out on first try when I do them according to gut feeling, or I know immediately that they'll take ages and I'll never be totally satisfied with them. Fortunately, the latter doesn't happen very often, even now that I'm back from such a long break.