Is this the real life, is this just fantasy, caught in a landslide... 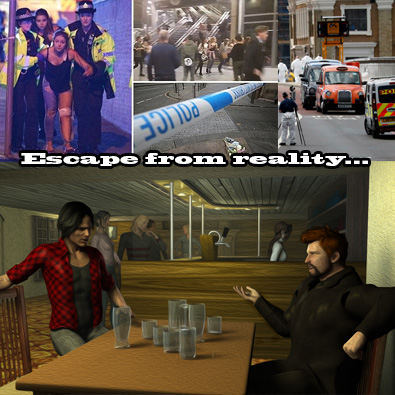 Hello Drunkduckers, Genejoke here with a guest news post for you. Well let me be honest, there won't be much news. Guest article would be more accurate.

Many of us regulars here on the duck are ageing a bit, we're no longer young whipper snappers with loads of free time to dedicate to comics as we might have in the past. Life gets in the way, work, kids, having a social life. It can provide great inspiration, don't get me wrong, but finding the time to put that into comic form can be tough.

In the past many of my most creative periods have been when life is miserable. I've taken that and turned it into something and found refuge in creativity. Of course that's a much discussed topic but it goes hand in hand with what I'm getting at. There are times you can't escape and have to commit to the real life.

Case in point, this post is late going up as a close friend ended up in hospital last night and I dropped everything to help. He will be fine after some surgery later today. Even so, I'm finishing this post off trying to gather my previously coherent ideas about what I was going to write and struggling to get back to the head space I was in when I decided on the topic. That's the same problem I have with making comics right now. I wonder how some people manage to keep updating so consistently and lead busy lives, answers on a postcard please.

Personal lives aside, world events can also have a large impact on our time and creativity. Here in the UK there's been a lot going on, two terrorist attacks in as many weeks in the lead up to a snap general election all that set to the backdrop of the pending Brexit negotiations. We live in interesting times and it's hard to escape these things. Should we try to escape them? Personally I believe we should, but only for a short time. Enough time to get respite and find joy in things, but not enough to ignore the problems around us. This goes for personal lives and the larger world, naturally.

A few days after the recent attack in London my 8 year old started having nightmares because of what he had seen on the news. Why is this relevant? Well I think it just shows the extent that outside factors can affect us. Much as the changes in my personal life have greatly affected not only the amount of time I an put into making comics, but the nature of the comics I make.

Shameless self promotion time! The nature of the comics I make has shifted a little, I used to make things more removed from reality, sci-fi and fantasy stuff mainly, but in the last year or so I have moved to more real life story telling. The results of this are the 90's murder mystery Blood and water and the slice of life romance and dating related Fishing.

Sorry it's been a rambling post, don't forget to check out the upcoming Drunkduck awards. Please get involved if you can.

There's a hell of a lot going on right now, that's for sure. England has got a lot of serious stuff happening. It is weird how the stressful times can feed creativity.

Yea, even tho I have a small comic (which I'm very slow with), I struggle with the updates due to my little family and full time job. With the weekly sports practice my daughter is in, I MIGHT have a hour each night. I try to keep up with DD and other social media in between. My weekends are less occupied, but I have make sure I'm up earlier to work on my comic. Before I know it, we (my family) are off doing some that day.

I'm glad your friend is OK. Hope the surgery goes well. Strangely enough, being creative can be practical when bad things happen. I had frequent nightmares when I was a kid and I started my entire fictional universe as a framework to fight back. It worked!

My heart goes out to the UK.... Yes, everything you say is true about the times when we got the most creative was when we were down. You should read up on the famous Mexican painter Frida (the heroine of pain). She faced agonies in life no one would wish on their enemy and yet she made one of the most impressionable statements in the art world.

Interesting article. It's a difficult balance to strike - more of an equilibrium, since time spent on real life totally outweighs time most of us can spend on comics. The only way I can post anything at all is by getting less than 4 hours sleep most nights and I'm sure that's not good. It doesn't help you to do your best work either. I did manage to get involved in the DD Awards by posting a trophy design and actually finished it by 4am. :D