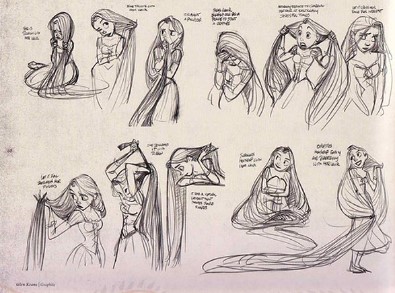 So you have your kick ass story ready, you’ve researched your world well and feel comfortable in it, and you have an awesome set of personalities to equip your characters that will propagate your story (or complement it if the plot is story driven).

The only thing left to do, is design your characters visually. That in itself is a potentially daunting task. A character design is going to accompany you throughout your story. Even as the character evolves, the character design you initially come up with will be the basis and the framework of that development both visually and qualitatively. It has to be able to allure your audience, make the characters distinct (even perhaps more memorable than their names, especially if the names are going to be unfamiliar) and potentially communicate indirectly facts about the character’s background, history and personality.

So when designing a character, I usually go through these steps in order to come up with a design for them that will cater to those elements:

As simple as that sounds, it is important not to skip it. The character’s age, height, body type and social class are going to be the canvas upon which the defining characteristics will be featured. Therefore it’s important to list them clearly on the character sheet. It will also help to keep the character consistent through the comic, especially if he/she hasn’t made an appearance in a while.

Even if the character is going to be a fish-out-of-water in the general setting, there is going to be one where he/she isn’t, where he fits (and which will be his/her setting of origin in the story). So the character will have to be primarily designed to be a product of his/her time, era, culture and social standing. So here we need to decide on range of wardrobe, body language and range of hair styles that he/she would have to select from. Name options also should be decided here, if we don’t have a name for him/her yet.
Even if the character would have stood out in his/her original setting, still basic parameters would be adhered to. Just look at character designs like Mulan: she is designed to be unable to fit in her world, but she still is definitely a product of it. She is a Chinese young woman in China. Her motivations are a product of her times, her culture and her era. Her problems are problems of that world. And of course what she wears fits in, even if it isn’t absolutely ‘proper’ for her original goals and aspirations.

Make the character distinct to the audience

Once you have down all of the basic parameters that will make your character a product of the world you have designed or revived, comes what to me is the fun part- making the character distinct to the audience.

A good primary method to do that is to assign a specific feature to each character to make him/her distinct and work on and around that: The eyes, or the hair, or the face or specific fashion choices.

For example, in my first comic Wolf, Zoe’s pigtails and weapon of choice (the scythe) became her distinctive characteristics while David’s were his hair color and nose. So even if the audience forgot their names, they’d still remember the pigtails girl and the carrot top. In Without Moonlight, Fotis’ hair is curly and he has large green eyes while his frame is lean and energetic. Basil has a distinct set of scars on his face and a terrible uneven hair style that indicates he hasn’t had a haircut since he returned from the front. He also lacks his right forearm. You can’t miss him.

That, however, may not be enough. Assuming you have decided on distinct personalities (you should!), those have to translate to the character’s body language and expression. Here is where little quirks come in: a character chain smokes, or they roll their eyes often, or they gesticulate a lot. In Brave Resistance, for example, Nikos is the shortest guy in the cast, he’s blonde and he gesticulates more than if he had to guide a plane’s landing. His facial expressions are always distinct, the face always very animated. On the contrary Sakis is stoic, his expressions still distinct but reserved, underlined more by his facial hair than anything else.

Make sure you can draw your character thousands of times

Finally, protect yourself from punishment: Make sure that the design you’ve chosen is one you can comfortably replicate over and over as you draw panel after panel of your story with your characters in it. Don’t give your characters features that take too much time to draw (like for example, chainmail) or find a method of drawing such an element relatively quickly (like for example, chainmail) otherwise it’s very likely you will experience burn out for the character and even for the story itself.

And that’s it! What steps do you take when designing characters?

For me, the last advice is so true. I've caught myself drawing the character slightly different from original design. And had to make corrections

@Bravo- yup. The lace on Hussar jackets are a pain to draw. There are ways of simplifying them but they're STILL a pain.

Great article! "And that’s it! What steps do you take when designing characters?" -Check characters personality -Check the character purpose/functionality in the plot -Create the best form which fits well to those two points above. -Search for references -Improve the chara design -Simplification That's it.

Btw, great tips on distinction. I'm very glad Detective Conan usually makes a stand-out feature on each of the suspects du jour. Particularly since I am useless at remembering random Japanese names.

There seems to be a sweet spot to complexity. If a design is too simple, it can be boring to draw. The clothes and expressive possessions (vehicle, phone, home, pet) are great extensions to accent a character and remember them, but the more subtle details like eye-shape, jawline, and expressions go a lot further in defining them. A pretty good test to a character design is whether you can tell what character it is even if they are dressed in costume, change make-up, grow a beard, gain 20 lbs, etc. (I won't even pretend my own characters can pass those tests. But I am pleasantly surprised when one is recognized in disguise.)

Fantastic advice! You can learn to simplify the complex though... in the section of the Godstain where Kimber Lee wore the Greek outfit... I sorta dreaded having to do it over and over for the arc... but then I hit a groove, figured out how to simplify and suggest and then it became candy!

Real talk, look into the wardrobe of the setting of your story as your designs will benefit and look as if they belong in the environment your drawing.

That killed one of my planned webcomics. ;)

Making sure you can re-draw them is important! You can simplify parts of them after the fact though. Introduce them with chainmail and have them take it off early in the story :D

What's so hard about chain mail? Nearly every character in Sword of Kings wears it. Wavy lines. Draw the shape and drape, not every single link. Real mail flows and drapes as it jingles, very fluid. Depict it like that.