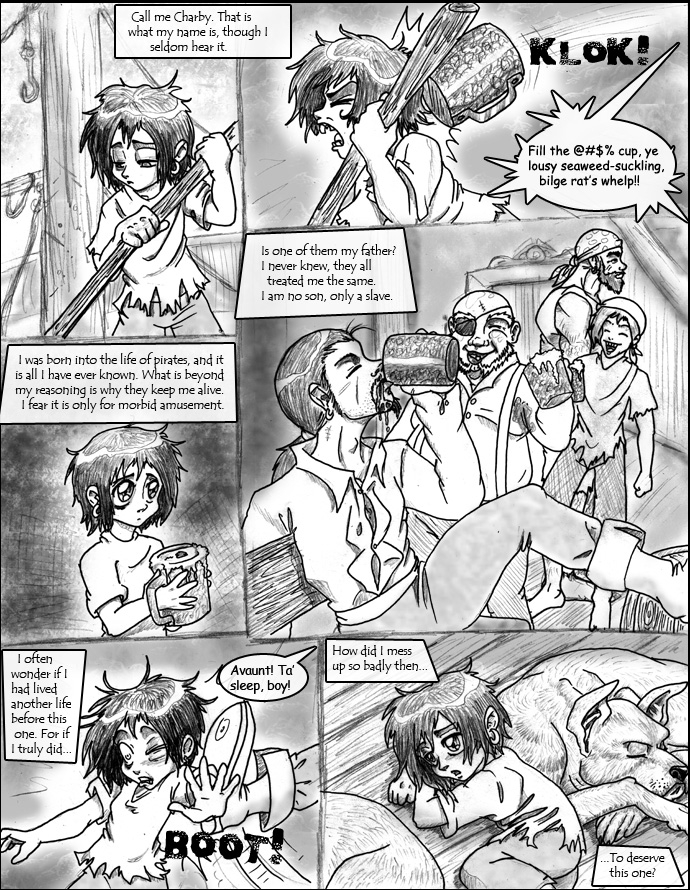 Thank you everyone for such a warm welcome!
Wows, I feel all special now…but youse guys are the special ones, thanks for all the wonderful support! Group hug everybody!

Alrighty on to the story:
It won't all be narrative, but you'll see why it is at the end of this little tale.
Yes, the first line was a reference to another tale of the sea, Moby Dick.“Call me Ishmael” is the opening line. How nautical of me harhar.(I'm such a geek, but I like it)
We didn't get to know Charby as a human previously, so I thought this would be a nice new thing to see. It may also answer a few questions, or make more, but that's the point ^_^
Most of them will be done like this, in pen, pencil and a little bit of computer (all of the textures were custom-made on paper though)
It may be obvious who the Captain is. The one swilling grog and kicking Charby around is Captain Robert, the cyclops is Kraney, the smaller fellow is Jones and the big one in the back is Barnes. While Robert is more abusive in an authority sense, Barnes and Jones are like cruel high-school bullies, but instead of just dealing wedgies they threaten to kill him for fun. Kraney more or less ignores Charby unless he's in his way. Even the dogs aren't very nice to him since he has to fight them off for scraps.
And don't worry, it won't all be this depressing!
Anyhow, I'm not sure about a clear update schedule yet, it may be every other day (stalling for a few reasons) because I'm also working on the new pages as well. Of course when this arc is done,I'm probably gonna spam-load the rest of the old archives until we get to our current arc again. However,if you want me to slow it down for new readers I'm fine with that, it would likely be 10-20 pages a day every day.

In closing, I hope this didn't seem too cheesey, I had a heck of a time working the dialogue (this is different from the original 3 versions I did, in which it was 3rd person, and they went from 7,to just 2,to 25 pages)

I hope he doesn't have scurvy,that kid needs some orange juice quick.

I started reading your stuff with Unlife Is Unfair, and decided to look and see if the grass is really greener on this side. I love this Eden I've found myself in.

Where do I find the rate button? I wanna give this a five! ^_^

WHAT!? I kept putting off this comic because I honestly thought it was "Charby the Vampirette" But Vampirate sounds much cooler

Beginnings are the best part. Especially if they're written after a few hundered episodes. Definately my fave 16 pages of CTV

i love how you draw facial expressions!

I'm starting the journey very late.... but in time I shall catch up.

Well that is a good beginning.

That's funny; I don't see any crappy art anywhere. Oh well. This story is a lot more nautical than I imagined it to be; I guess that would explain the "pirate" in "vampirate," would it? You know, having never read this comic before until now, I didn't know Charby had such a depressing start in the story, or that he wasn't always a vampire. Poor little guy; I feel sorry for him. :(

I like the textures. The story's pretty sad already though. :(