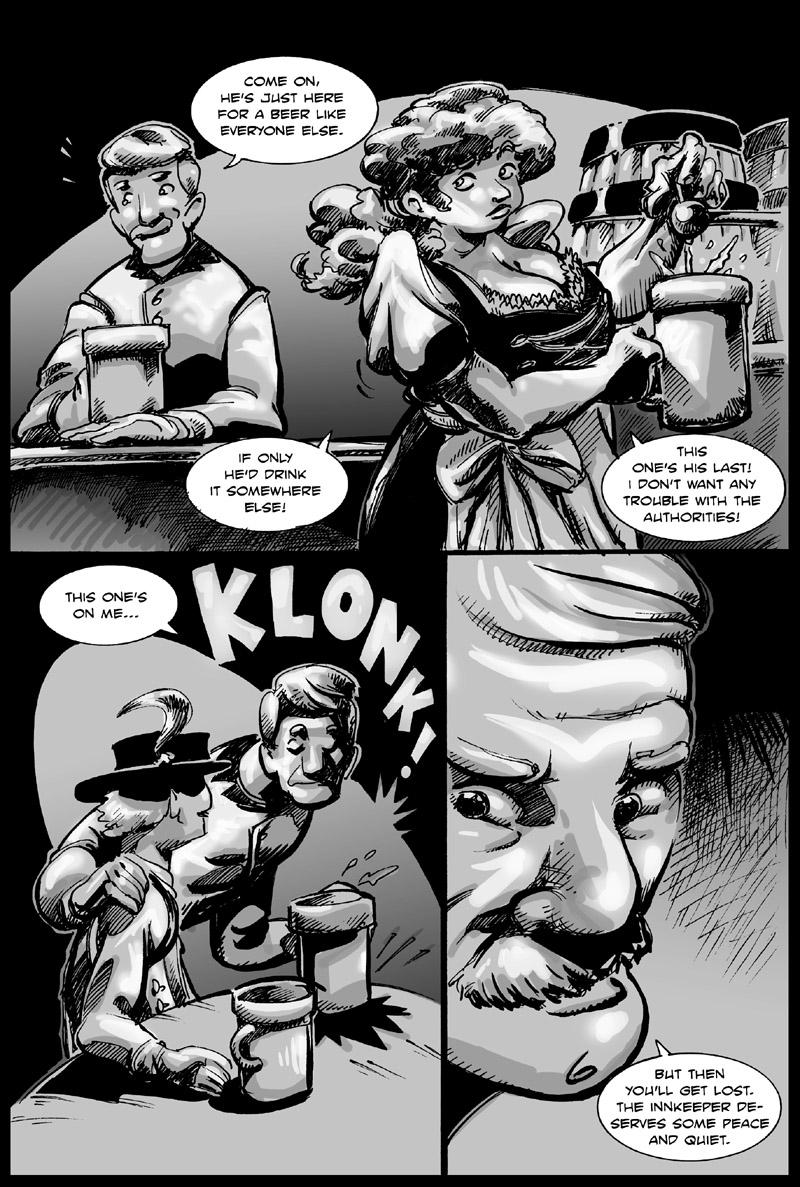 Page 3 of a 4-pager for this year's “JAZAM!” comic anthology.

Jennerwein is an actual historical figure, but as with any good historical figure, there is a myth entangled with the facts. First off, I did not care too much about historical accuracy (probably because that spares me research :3). But of course you always end up thinking about a lot of things which eventually won't be included in the comic. For instance, I thought a lot about how to portray this bar, and what it would have looked like back then, or how people would have happened to meet there (in a time when meeting people was obviously far more difficult, with very limited media of communication, if any).

In the end, what was most important to me was the theme of Jennerwein as an ambiguous sort of outcast - he was a hunter who opposed government injustice, which made him a hero among the regular folk. But I figure he wouldn't have been a celebrated hero, because people would be very careful about being seen with him. And that is what I tried to show in this comic.

Thanks for reading and commenting!

DAJB: It's hard to tell in general, I think. I could also mention Robin Hood, a thief with a much better image! Just goes to show that civil disobedience can be a virtue as well as a vice, depending on the context.
As for the buxom barmaid, that's probably the most historically accurate bit about this comic ;-) I'd invite you to the Oktoberfest here in Munich, if it wasn't just about skinking to the lowest level of human existence as fast as possible these days… (Also, I happen to frequently read that the most buxom “maids” are still to be found in Britain, so you better stay right where you are!)

Sounds something like the equivalent of the highwayman Dick Turpin. The myth would have us believe he was a "gentleman thief" and a local hero because of his ability to evade capture. In practice he was a vicious thug and certainly [i]not[/i] admired during his lifetime! Oh, and what happened to buxom barmaids, eh? We need a campaign to bring them back!