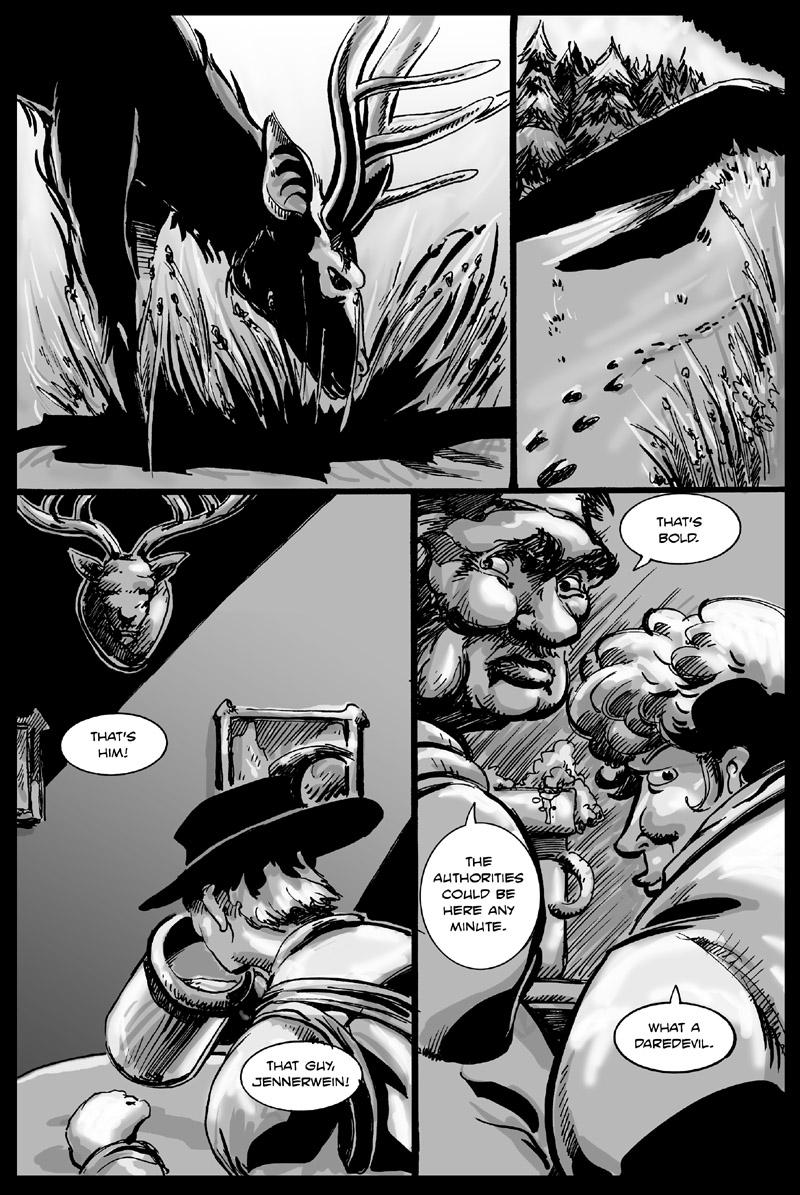 Page 2 of a 4-pager for this year's “JAZAM!” comic anthology.

I had been thinking for some years about what would interest me in doing a comic with a local theme. I probably shouldn't say it, but I don't particularly like the German comic scene. Don't get me wrong, there are some great writers and artists around, but in the end, to me it always seems like no one really cares about the concepts they translate into comics. Very often, they would seem like a mere byproduct of everyday life. Whereas I whole-heartedly believe in comics as an art form. I think that good comics have to be more real than reality itself, in a way. This is a very vague point, but it's something that's hard to express. My most basic point is that comics must go beyond cartoons and satire.

Anyway! I was determined not to give in to the general silliness which lends itself when doing a “localized” comic (like a specifically German or Bavarian superhero - a concept prone to silliness). I wanted it to be serious, and have a somber tone. That is why I chose Jennerwein.

Thanks for reading and commenting!

DAJB: Thank you! (Of course you don't need me to tell you that you pulled off the not-veering-into-parody bit on Shades brilliantly. There are some funny/witty nods to the genre clichees, but that's more like a bonus for nerds– er, genre-savvy readers such as myself.) The “doing localized superhero right” topic probably deserves its own field of scientific study. What's most important to me is probably that the protagonist here is a “hero” AND an outlaw, or a vigilante… much like the Wild West heroes which evolved into the modern superheroes.

I can sympathise so much with your Author's Comments here. As you're probably sick of hearing me say, when I decided to try and make [i]Shades[/i] a "British" comic, I was very aware that the very idea seemed to lend itself to silliness and self-mockery. I had to keep reminding myself very consciously to keep it from veering into parody. (Or at least to try to!) Oh, and the transition from the live deer to the mounted head is clever, too!