Abt_Nihil
it's caused me some headaches, since if everyone's got a teleportation device and can use it any time, there's hardly anything that would still have to be done the traditional way. People would teleport all the time! :p

I was actually just thinking of that the other day. I guess you could always use certain fail safes though like it's unreliable or can only be used so many times so they prefer to use it only when they absolutely have to, or dangerous if you use it too frequently. I guess if someone could invent a teleporter someone else could invent a device to scatter the signal so you can't teleport too close if they want privacy
last edited on July 18, 2011 10:16AM
link
AzuJOD at 5:28AM, March 1, 2011

Macattack
I guess you could always use certain fail safes though like it's unreliable or can only be used so many times so they prefer to use it only when they absolutely have to, or dangerous if you use it too frequently.

AzuJOD
There could also be someone who gets motion sickness after using the teleporter. 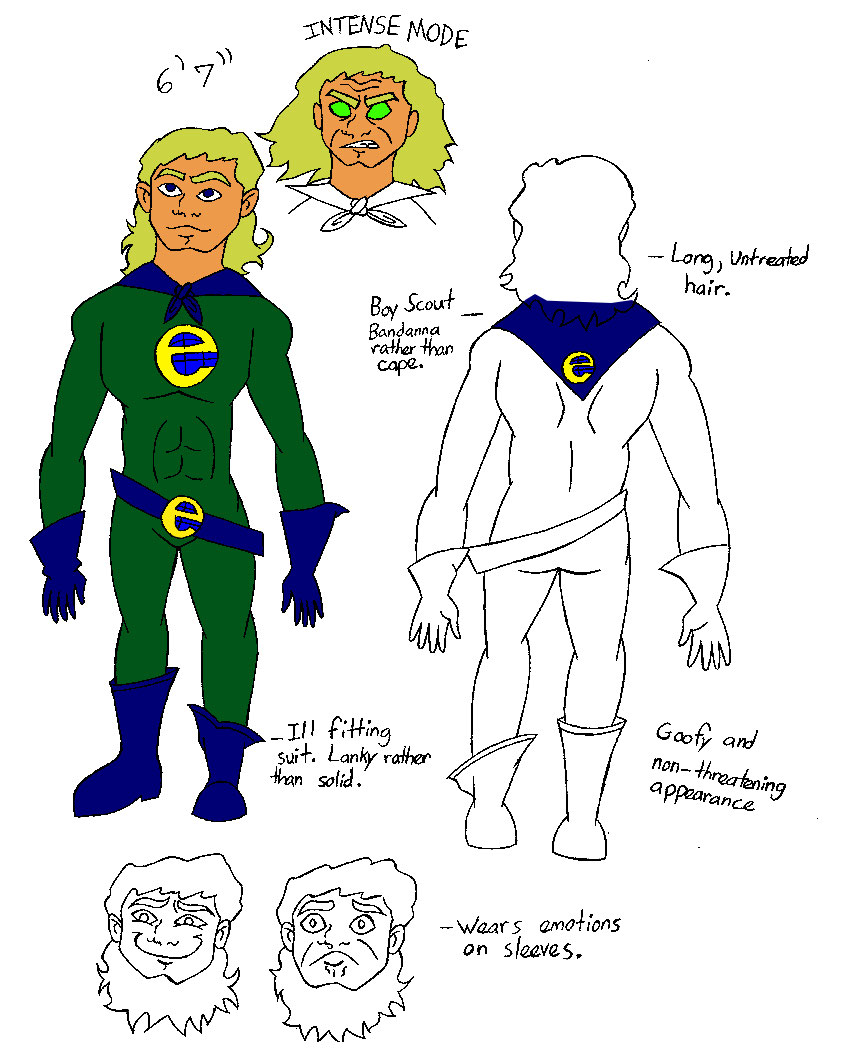 The Ecotist, I imagined the guy being tanned and having blonde hair with just a tint of green to it. Also, built like a tree.

Crime Warp, I imagined him being more of an average looking guy. Plus he provides a nice contrast for Ecotist.

(online) posts: 456 joined: 1-3-2006
As far as I recall or have been under the impression, the HA's teleport system make you glowwy and white and disappears you. Crime Warps would probably be black with gold swirls and glowwy and disappear you.
K.A.L.A-Dan: Rival!

(online) posts: 370 joined: 12-20-2007
With my script, I have a few references down that weren't there before, but I think I should ask for some help with others. I can probably do some of them, but I still would want a bit of help, especially as I am not good at drawing locations.

References still needed:
The Spatulator (I can draw it, but also would love to see if others are willing to design him. He's the only hero without a reference)

The minister and couple (the other characters without references. I have a friend who I think I'll ask if she wants to be portrayed as the minister, since she is an ordained minister, but the couple is still very much up in the air)

The church: exterior, “lobby” and main room (I could try and get references, but I really can't draw a church, and I don't know what photos I might be able to grab)

Heroes Alliance meeting room at their headquarters (this one is likely simple, but still is a needed reference, I think)

Heroes Alliance jet interior (yes, they have a jet in my story. I guess I was thinking of the X-Men and the Avengers with that bit of it. Another likely simple reference, but needed)

Bank exterior and, maybe, interior (the interior only shows up on one page, but you never know what references people might want)

Any suggestions from people? If some have already started their pages, I would love to know how they have depicted what's there. I definitely need the reference for the main room of the church as soon as I can, because I do have an artist for the double-page splash, but he wants that reference, which is understandable.

Edited to add:
I found some pictures of church interiors off of Google Images that I think might work kind of well for the main room. As you an see with them, I would prefer a church which is not a cathedral, but then again, a cathedral would better accomodate the fights, so I guess you give and get. What do you think? The photos are linked below.

As for the church interiors, I like the third one best. It's got a nice modern look.

While I'm at it, I got a new design for HUB.

AzuJOD
I got a good idea for The Spatulator, if you like.

As for the church interiors, I like the third one best. It's got a nice modern look.

While I'm at it, I got a new design for HUB.

I also think her chair needs a new design, maybe something with plasma cannons that flip out from behind.

OK, I made something:

Of course, the guns and arms are retractable when not in use.

(online) posts: 370 joined: 12-20-2007
I definitely would like that reference for the Spatulator. And that picture of HUB is pretty cool, plus the chair is amazing.

I drew up a design for the interior of the church, but I may have to wait until Tuesday to upload it, because that's probably the soonest I can get to a scanner. I want a place where the scene with the Spatulator and Oscuro makes sense, and yet I don;t want a place where shadows really overtake it. But my reference is not the greatest. I could just go with one of the pictures above, since it would be really easy to go with a photo as reference.
last edited on July 18, 2011 10:16AM
link
cdmalcolm1 at 7:41AM, Aug. 3, 2014

(online) posts: 337 joined: 8-21-2012
Speaking of teleportation. How come no one is afraid of teleporting? I mean it is technically killing you and reforming you on the other side. PLUS, what if something goes wrong? Like the program gets corrupt. Someone hack the system, or it gets a virus. I propose a much safer alternative.

Why can't there be a member that can open up gates or a stable wormhole? That would be much safer to go through. I have created a hero that can do just that. He opens up spheres that anyone can go through. He is kind of a nerd and hates fighting, so to speak, but he can do this with ease. He is a tech guy that loves the computer, goes to comic con and so forth. Anyway, my point here is to kind of like semi getting rid of the teleport thing and using a door master instead. He would still use the teleport systems and the teleport GPS program to open exact locations. Everyone that has the current transporter will be used as beacons to instantly be encased in the sphere to locations where the HA member wants to go. He would do all this from HA HQ. He would be staying at HA HQ working as a tech support and monitoring transport systems for. HA.

Now I know that HUB is there as tech but there could always back up should incase of anything, like work loads, multi computer issues and transport.

I love HUB's new chair BUT, if she were to go out into battle with all those guns and all, she has no defense. She may have force field of some kind but that requires a massive amounts of energy to keep stable. If projectiles were to keep bombarding her shields, it will break. I think Armor, of some kind, should encase her like a tank. I also think she should be more of a defense support if she happens to go out on the field of battle. Kind of like HQ on the go.

Here is what I would do to her chair. The guns, I think, is a bit over kill. I would give her full cover armor modes, with force shielding. A master teleporter system should encase a HA member teleporter breaks, or gets losts during a battle. She would work with HA's door master to get them out of there should the time arise.

Anyways, that's my two cents about the current transporter and HUB's Chair.

(offline) posts: 1,413 joined: 8-7-2007
A valid question! I believe the teleportation tech originally came from Aegis in HU: Cavalry, and I've always just assumed that it was beyond reproach.

(online) posts: 770 joined: 1-13-2007
Certainly both HU and HA have been using the teleport system for a while and there have been no sign of Star-Trek-style teleporter shenanigans and no reason to doubt the technology as ineffective.  That's actually a point of distinction, I think.

It's entirely possible they actually *do* use Wormholes rather than a dissassemble-reassemble approach.

Honestly, the teleportation system has been part of HU/HA almost from the beginning and feels a core part of the feel of HA.  I think there'd need to be a very good reason to start making it fallible or discontinue it at this point.  There are ways to do so, of course, but why would that be a good idea?
Tales of the unpredictable Chaos
link
ironhand at 8:44AM, Aug. 11, 2014

(online) posts: 323 joined: 7-29-2007
Also, as for the “wormhole” character, the teleporting kind of aspect is shown in my character Beam over on The New Guard…so that team doesn't have the teleportation devices.
I think the teleportation thing is just pretty cool for the HA at the minute, it certainly gets around some issues like how they travel the globe fast enough etc…I did put a throwaway joke in the ninja issue about the teleporters, though. I can't remember it exactly, but I remeber Azumorph comments that it's the first time using the teleporters has worked in their favour (instead of chasing villains with it in #4 and also being captured by it in #1/#2)
Stop looking at my signature and read my comics!!
link
‹‹ previous 1 2 3 4 next ››